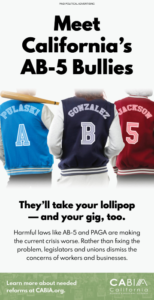 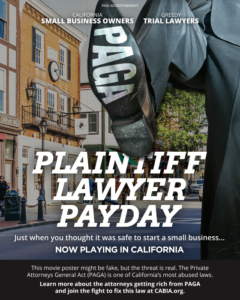 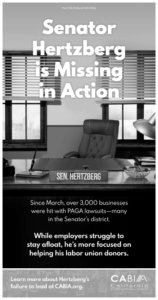 The ad features stories from real freelancers, told in their own voices, who have been harmed by California’s misguided AB 5 law — a law that made it illegal for many freelancers to earn a living.

The ad aired on Fox News nationally the day of the debate, Tuesday, September 29. It also aired locally on CNN and Fox in San Francisco during the debate.

President and Founder of CABIA Tom Manzo released this statement on the ad:

“Laws like AB 5 and the Private Attorneys General Act are a disgrace to our great state. Everyone involved in sustaining these awful laws — the trial lawyers, the unions, the bought politicians — should be ashamed. California’s disastrous experience should be a warning to any politician who wants to expand these ideas nationwide.”