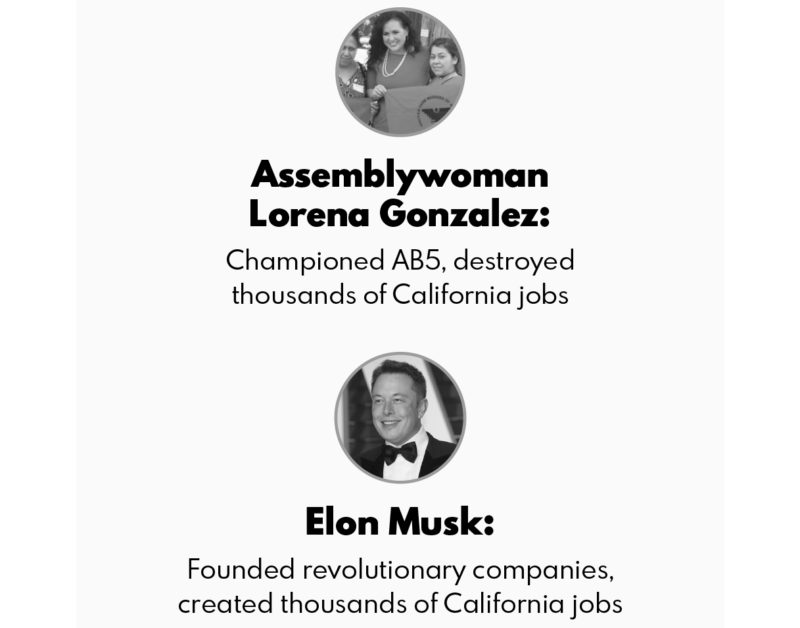 In response to Gonzalez’ tweet, the California Business and Industrial Alliance (CABIA) is taking out a full-page ad in the San Diego Union Tribune tomorrow. The ad features Gonzalez’ tweet attack on Musk, and puts the achievements of the two side by side: Gonzalez, responsible for destroying thousands of jobs through AB5; and Musk, responsible for creating thousands of jobs. The ad asks viewers, “Who’s really f***ing California?”

Download a copy of the ad that will run in the San Diego Union Tribune tomorrow.

The human cost of Gonzalez’ AB5 is immense. A Facebook group, Freelancers Against AB5, has collected hundreds of personal stories from independent contractors whose lives have been upended by the law. The site’s administrator has collected a series of news stories on AB5 harm.

Tom Manzo, president and founder of CABIA, released this statement on the ad:

“Assemblywoman Gonzalez is part of the problem in California. Her terrible AB5 law has cost thousands of independent contractors their ‘gigs,’ and it’s only one of many laws that make California inhospitable to business. No wonder Elon Musk and others feel like they’ve been screwed. Gonzalez should get off Twitter and get to work undoing the damage she’s caused.”