California’s AB-5 law authored by Assemblywoman Lorena Gonzalez — with help from the California Labor Federation and its leader Art Pulaski — has cost countless California workers their gigs. Yet, state legislators including Senator Hannah-Beth Jackson continue to block attempts to reform or repeal this harmful law.

Sen. Jackson recently argued that freelancers are only mad about the law because the state is “taking away the lollipop they had [to be able] to work when they want.”

In response to Jackson’s tone-deaf comment — and in conjunction with a scheduled hearing tomorrow on Gonzalez’ AB-5 “fix” — the California Business and Industrial Alliance (CABIA) will take out a full-page ad Wednesday in USA Today featuring the trio mentioned above as the schoolyard “bullies of AB-5.” The ad warns workers the group will take their “lollipops — and your gig, too.”

The ad informs viewers that “harmful laws like AB-5 and PAGA are making the current crisis worse,” while “legislators and unions dismiss the concerns of workers and businesses.” 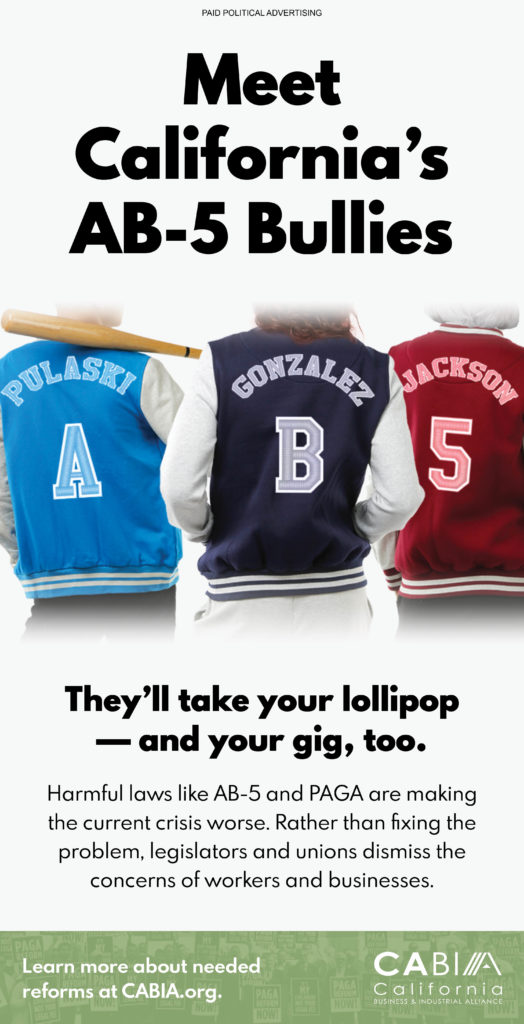 Download the full-page ad that will run in USA Today tomorrow.

CABIA President and Founder Tom Manzo released this statement on the ad:

“Gonzalez, Jackson, and Pulaski are no better than schoolyard bullies who continue to kick California’s struggling workers while they’re down. It’s disgraceful that our state legislators would refer to the independence and flexibility freelancers value as nothing more than ‘lollipops.’ It just shows how out of touch with the needs of real workers these AB-5 bullies really are.”