Today, the California Business and Industrial Alliance (CABIA) took out a full-page ad in USA Today calling out CA Labor Chief Julie Su for “jumping ship” to the Department of Labor after presiding over historic failures of the state’s UI system. Su is President Biden’s nominee for Deputy Secretary of Labor.

The ad features a cartoon caricature of Su jumping from a sinking ship called the “CA Employment Development Department.” The ad copy states that Julie Su “presided over a historic failure of California’s unemployment insurance system.” Now, instead of fixing her own mess, the ad condemns Su for “escaping to Washington.”

The EDD in California is a sinking ship and it’s due in large part to Su’s failure of leadership. Su owes it to the millions of Californians who were harmed by the state’s unemployment insurance failures to stick around and make things right. Instead, she’s hoping to take the easy way out by moving on to the Department of Labor. But her track record shows she’s not qualified for the job. Su has done enough damage to the people and businesses of California. Senators should vote ‘no’ to exporting her failed policies to Washington.

CABIA has been a leading critic of Su’s DOL nomination. Most recently, Manzo penned an opinion piece in The Hill criticizing Sens. Hirono (D-HI) and Duckworth (D-IL) for their endorsement of Su. 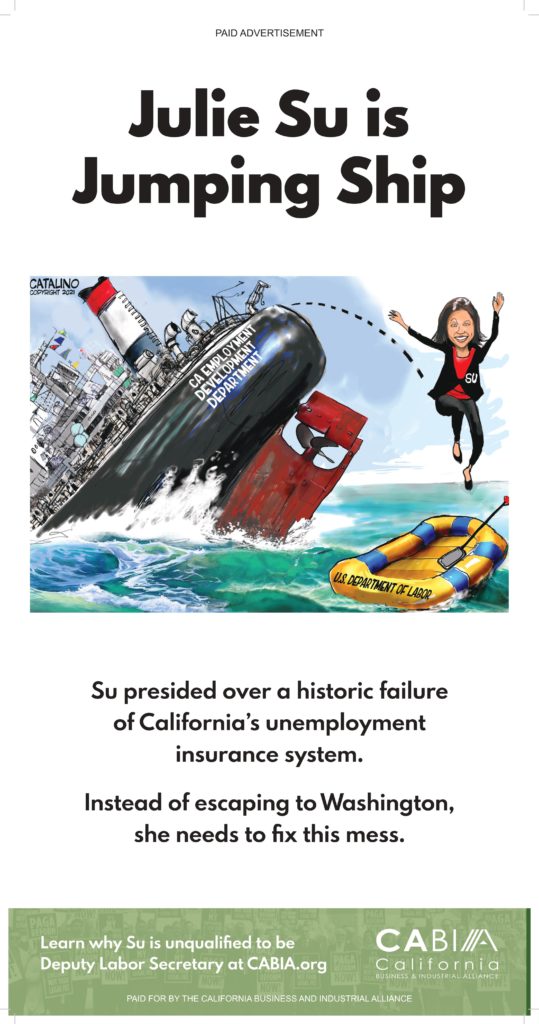