The Private Attorneys General Act (PAGA) authorizes aggrieved employees to file lawsuits to recover civil penalties on behalf of themselves, other employees, and the State of California for Labor Code violations.

PAGA was originally enacted to help the state regulate its underground economy – those businesses that operate unlawfully outside of tax and licensing requirements. But PAGA also allows employees to sue for almost every Labor Code violation, not just serious violations or those dealing with health and safety. Today, PAGA claims have grown more than ten-fold since the law was created, and can be more harmful to an employer than a regular Labor Code violation or Unfair Business Practices claim. 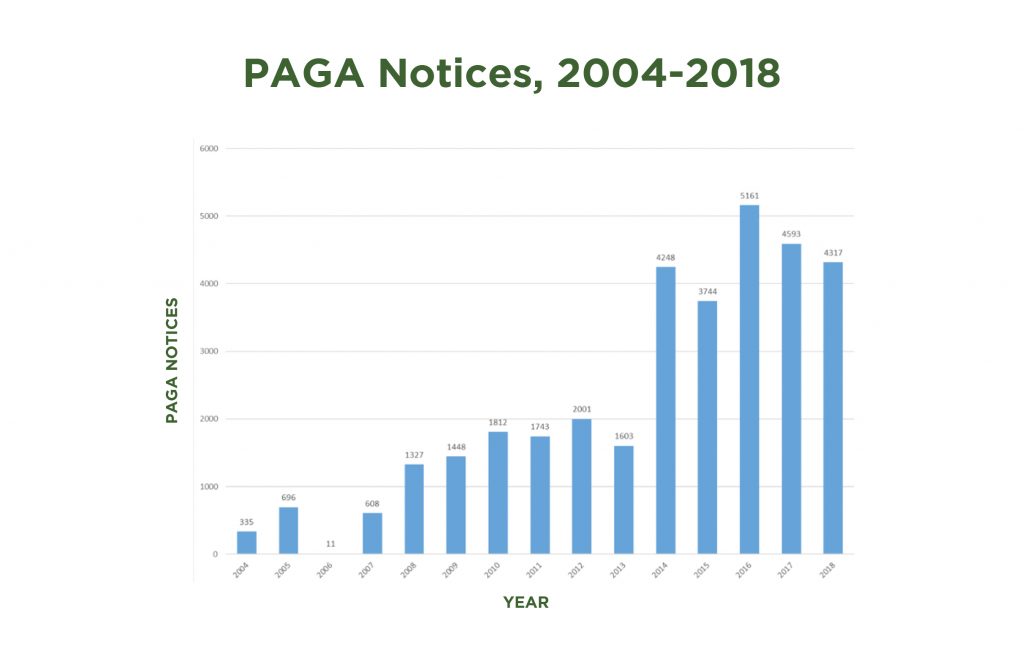 PAGA has two main components that affect employers. First, PAGA gives employees the authority to sue as so-called private attorneys general to recover these monetary penalties for an employer’s violation of the Labor Code. Before the enactment of the PAGA, employees could not bring civil actions in court to enforce non-monetary provisions in the Labor Code; only the State Labor Commissioner through the Division of Labor Standards Enforcement (DLSE) could do so.

Second, PAGA imposes monetary fines on employers for each violation of almost every single provision in the California Labor Code. If the Labor Code does not already provide for a penalty, PAGA imposes on the employer a $100 fine for the first violation and $200 for each subsequent violation of the same provision. These fines can be assessed for each employee or for each pay period, when applicable. If the Labor Code already provides for a civil penalty for the underlying violation, the employee can sue to recover that penalty on behalf of similarly aggrieved employees.

The primary beneficiaries of these lawsuits are often the attorneys who have filed them. Consider the following examples from last year:

What can employers do?

Perhaps the best way for employers to avoid liability for violations of the Labor Code pursued under a PAGA suit is for employers ensure their business are in full compliance with the Labor Code. This is not, however, an easy feat given the complexities of understanding and interpreting the Labor Code and the Industrial Welfare Commission (IWC) Wage Orders as they relate to a particular employer’s business.

Many employers believe they are in complete compliance. But there are thousands of provisions in the Labor Code, all of which now can present an expensive trap for employers who are not careful. And because the Labor Code incorporates provisions from other codes, the list seems to keep on growing. One provision that is causing costly problems for employers is the suitable-seating provision of Section 14 of the IWC Wage Order 7-2001. Never heard of it? You are probably not alone.

PAGA is clearly gaining strength as a tool for plaintiff’s employment attorneys. In light of this, employers should be preemptive in aggressively attempting to identify potential bases for claims against them of non-monetary Labor Code violations. Once identified, those issues should be quickly remedied. Otherwise, the first and last notice to an employer that a potentially costly problem exists will be in the demand letter sent on behalf of an aggrieved employee by his or her attorney.